Harley’s had more outfit changes for her short lifespan than many comic book characters. One reason is that she doesn’t have a signature symbol emblazoned on her chest; just a nebulous idea of “red and black (sometimes)”, diamonds (also sometimes) and two bits of hair (usually).

In this post, I’ll only be looking at major appearances, rather than every minute change or special. (Such as Harley Quinn and Her Gang of Harley’s #4, where she’s showing off even more skin than usual in a black and red bikini.)

So whether you’re looking for cosplay ideas, fan-art inspiration, or just curious about the progression of Harley Quinn’s looks, welcome to Quinn’s Closet!

Classic Quinn. Her black and red harlequin suit, complete with the jester’s cap and dingle balls. Many still prefer this outfit, and with good reason; it’s classy and sexy. And who doesn’t love an original?

This look was created by Bruce Timm for Batman: Animated Series. She kept it for her first few comic book appearances with no major changes, and even wore it in her own comic book series. 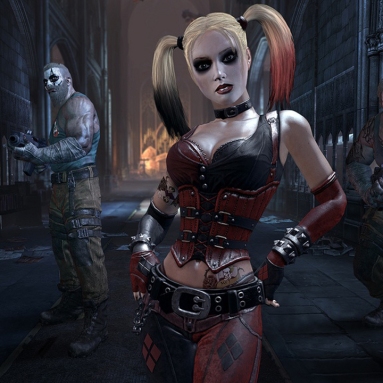 Harley Quinn was barely recognizable as the lovable psychotic clown as she paraded in a nurse’s uniform touched with red and blue details. In the sequential games, her outfit shifted a bit, keeping the corset but with black or white leather pants, gloves, boots, etc. that more closely resemble the Harley Quinn seen today.

Harley Quinn’s next official change was in the New 52, with a drastic shift that fell closer to her harlequin origins, while still keeping a skimpy look.

Her hair went to red and black, rather than the previously used blonde, and her outfit featured the original colors and card-centered designs. (In the beginning of the New 52, she wore a corset like below, but it has since shifted into a zip-up shirt like the one above.) While less cosmetic, her skin is also bleached from a change in her origin story.

The final change in Harley Quinn has been in the new Suicide Squad movie, which showcases a look so different from previous Harley Quinn’s that it sparked (unsurprisingly) a large amount of controversy.

The red and black has been diluted to pinks and blues, and they brought back the blonde hair while keeping Harley’s bleached skin. But even if you’re on the side of haters, Bruce Timm thinks it’s fine. And who’s to argue with Harley’s creator?

These generally don’t fall into the canon of Harley Quinn’s character history, but they’ve showed up in the DC Universe(s) before.

Harley Quinn once showed up in the Injustice franchise, featuring a suit that harkened back to her jester days. I can assure you that the flimsy fabric would do nothing to support her sizable chest, so I’m personally glad the style never caught on, but the outfit remains fairly iconic.

Harley’s outfit from the Suicide Squad animated series is one of her most utilitarian, neatly balancing the Classic Quinn and her New 52 styles.It hasn’t since been replicated, so it remains a little seen version of her suit.

At one point, Harley Quinn teamed up with the amnesiac Power Girl, convincing the superhero that Harley was her sidekick so she could do some good. Harley in this particular picture is simply adorable, so I can’t not include it.

And to end on a happy note, here’s some wise words from Tumblr. 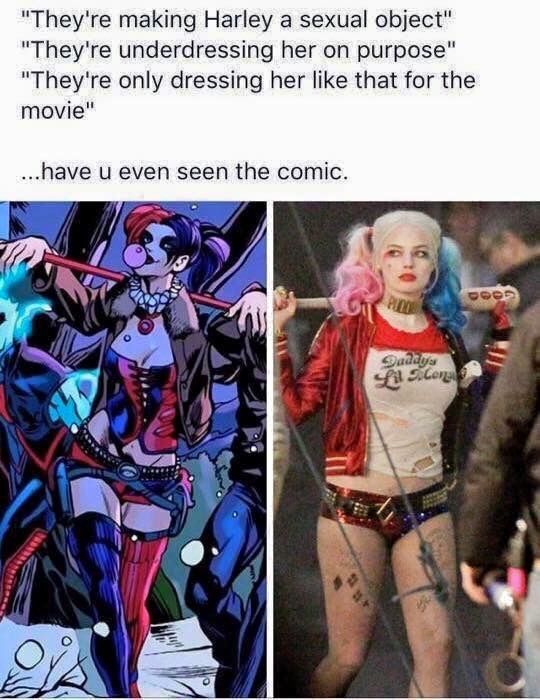